Important Message
Due to tier 4 lockdown restrictions our showroom is closed to the public, we are still operating a click and collect service under strict conditions and our telephones are still manned 01254 679231 PLEASE STAY SAFE

Meet the people behind Whitestone Garage 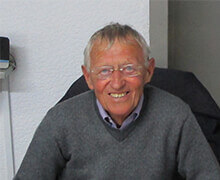 Warren started in the motor trade before the rest of us were born, in his younger days he was a keen amateur racing cyclist before getting the motor sport bug and racing a variety of cars starting with an Austin 1100 and progressing with a Lotus Cortina, an ex works Mini Cooper S, V6 Escort, Mini Jem, and turning to single seater race cars from the likes of Lotus and Chevron, it saw him race against the likes of Eddie Jordan, Tiff Needel and a young up and coming Nigel Mansell. In his final race season he competed in European Formula 2 and the British Formula 1 series a feat that could not be achieved today by any amateur race team. He started Whitestone Garage in 1981 and still in his 80,s insists on doing 6 days a week, except in the winter months when he takes some well earned time off visiting his daughter and grand children in Australia. 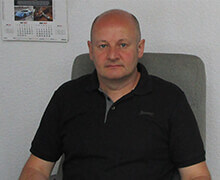 Chris joined Whitestone in 1983 and has been here ever since, responsible for the buying and day to day running of the business outside of work he enjoys driving his 1964 Triumph convertible or riding his unrestricted Suzuki Hayabusa, (the worlds fastest production motorbike ridden by the slowest rider around) A love of road trips has seen him tour extensively in America and Canada including Route 66, The Alaskan ice fields, both the American and Canadian Rockies, The Blue Ridge Mountains, The Pacific Coast Highway and Prince Edward Isle to name a few. 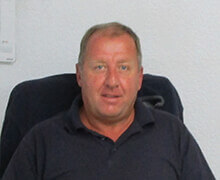 Mick is usually the first point of contact for anybody looking at buying a car from Whitestone, he joined the motor trade in the early 80,s starting at a local Vauxhall dealers, he then joined one of our sister companies in the 1990,s before leaving to spend several years working as a recovery driver for the breakdown services joining Whitestone in 2013. Outside of work he is a keen fisherman entering competitions with his twin brother that he always insists he wins, but we have heard fisherman's tales before. 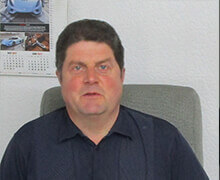 Mark (Bertie) The joker of the team is always good for a laugh. He started in the motor trade in 1982 as a valet at Ford and Austin Rover dealerships and since then he has had a varied career path spending time as a special constable followed by 15 years behind bars as a prison officer, a published childrens author, he currently splits his time between the motor trade and the very surprising career for such a joker of being a qualified funeral director, in the rare moments that he isn't working Mark can be found at race tracks watching modern and classic motor racing or tending his prized collection of classic Vauxhalls.

Just recently purchased a Volvo S40. The service I received was excellent. We looked at three cars, took two for a test drive and decided on the Volvo. Friendly service throughout, I would recommend Whitestone garage to anyone and would have no hesitation in dealing with them in the future.
GRAHAM

Search for a vehicle